College Student With Autism Encourages Others To Pursue Their Dreams 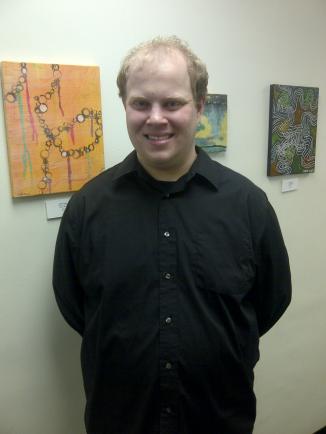 Ethan Engel grew up in Winner, South Dakota and has struggled with autism since childhood. Today he is a senior and an Art major at Black Hills State University in Spearfish. Engel is working to show others that despite having a disability, success is possible.

Ethan Engel says growing up with autism was tough. But, he says, looking back – he now considers his “disability” a gift.

“I feel like I had a unique kind of childhood, like, I tend to be by myself a lot, I’ve been shy and reserved when I was younger, I tend to talk to, you could probably say, imaginary friends,” says Engel.

Engel says his passion for art began at an early age.

“When I was little it started off when my Grandmother taught me how to paint ceramics and I fell in love with it,” says Engel.

After years of extensive testing, speech therapy, counseling, and hard work, Engel says his love for art helped him decide to leave his hometown of Winner and pursue a career in the arts.

Today Engel is a senior at Black Hills State University in Spearfish and is double majoring in Art and Graphic Design. He is also the President of the BHSU Art Club. He says going to college helps him develop his talents.

“We also have to develop leadership skills and to be honest I never thought I’d have leadership skills especially from a disability but throughout the whole college I have gained more confidence and I feel like I can definitely take on this challenge and so far I have been proud of myself,” says Engel.

Engel says he wants to communicate autism through his artwork. He paints, sculpts, and uses mixed media.

“I definitely try to use recycled, broke down, rusty, metal stuff and the reason why I go with that is because I feel like it’s been neglected out in the world — like I’ve seen it back in my hometown where it’s just laying out there like useless. All those scars, all the deterioration and all that, they definitely have a story to tell, and I wanted to recapture the spirit of those objects and try to create an artwork out of it,” says Engel.

Along with being President of the Art Club, Engel is also on the University’s Dean’s List.

He says he has overcome many obstacles on his journey to Black Hills State but hopes his successes are an inspiration for others.

“I really want to be the voice of autism because when I was younger I’ve been bullied, throughout my life saying I was dumb and everything, they called me names for it, saying I should not be ready for college. But to get an honors roll in high school and also a great GPA from this past couple years has been a lot to me and I want to encourage everyone with autism that they can go out for their dreams no matter what, just shoot for the stars, and they would definitely succeed,” says Engel.

Engel says he is making new friends but misses his family back in Winner. He says college life is busy and hectic but it has presented him with many opportunities and he’s learned that nothing can stop him from achieving his dreams.