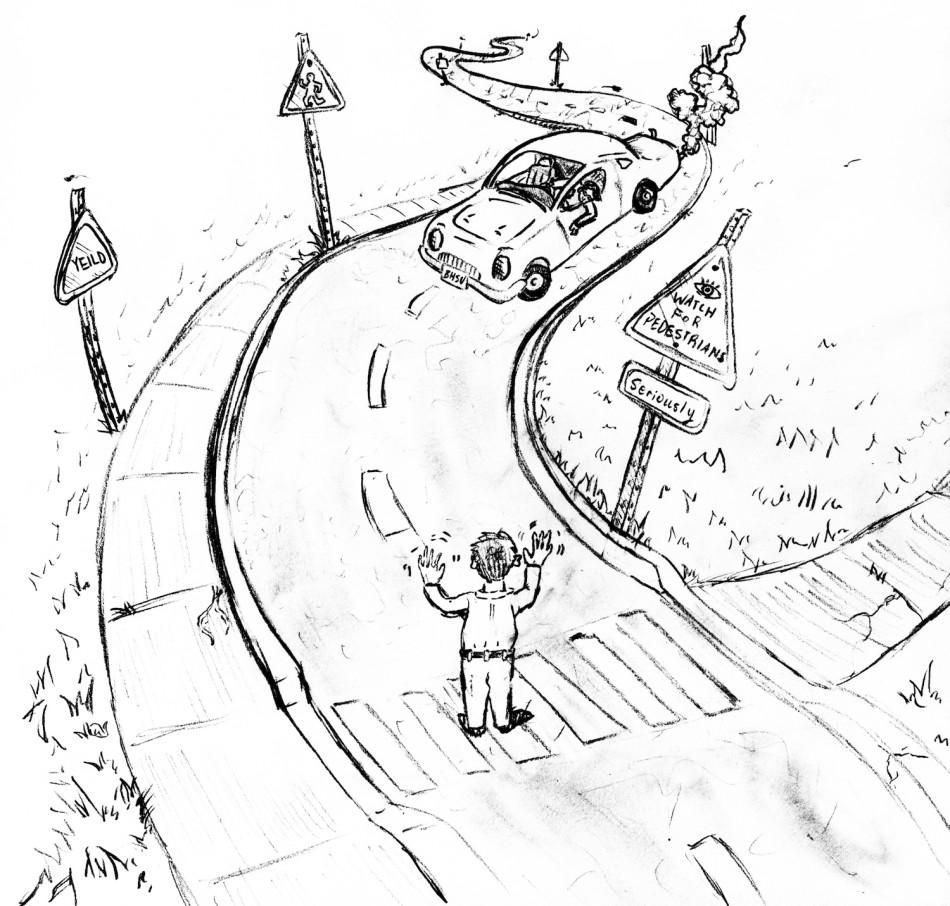 Local Black Hills State University students may walk to class to cut gas costs or to get some fresh air before their lecture. What else do these students have in common? They are at risk of getting injured on their way to school.

Remember the old childhood saying, “look both ways before crossing the street”? Where’s the saying for drivers? Automobile accidents involving pedestrians are on the rise in South Dakotaa��especially in the Black Hills. In 2013, the Rapid City Police Department issued 633 citations to drivers who failed to yield to pedestrians. Who exactly is considered a pedestrian? South Dakota State Legislature defines a pedestrian as, “any person moving or traveling on foot, including any person wearing roller skates, riding on a skateboard, or riding on an electric personal assistive device.”

According to News Center 1, Rapid City police cited a driver on Friday, March 22, 2014 for failure to yield after striking a pedestrian within a crosswalk on Mount Rushmore Road. Another report from the Rapid City Metropolitan Planning Organization stated that Rapid City’s rate of pedestrian-automobile accidents was more than double the rate in the entire state of South Dakota.

Take the marked crosswalk on Mason Street near campus for example. The painted stripes are weathered and fading, and the pedestrian crossing sign has been roughed up a bit after being hit by cars numerous times, sometimes in broad daylight. It is relatively unmonitored by law enforcement and an increase in traffic can occur at periods throughout the day due to its proximity to both West Elementary School and the student commuter parking lot near Jonas Hall. Add in a few distracted commuters who are jabbering or texting away on their mobile phones or speeding because they are running late for class, and the situation can become quite sticky.

Students who use this crosswalk to get to campus have recounted times where they have had to wait several minutes or more just to cross safely. Drivers would continue to blow through, despite the pedestrian right-of-way under South Dakota state law. Others described moments including drivers who purposely sped up to try and beat them to the crosswalk, dirty looks and even being cut off by mere feet when the driver was required by law to yield.

Drivers are not necessarily entirely at fault. It needs to be stated that pedestrians cannot just cross the street however they please. Jaywalking is an offense considered illegal under South Dakota Codified Law. Pedestrians must yield to traffic in certain cases. They cannot suddenly step off a curb and walk into the path of a moving vehicle, causing immediate danger to him or herself and the operator of the vehicle. Out of all the accidents in Rapid City that result in injuries, 200 involve pedestrians. Between 2002 and 2011, 43.1 percent of the accidents were the fault of the pedestrian. However it is when drivers fail to yield to pedestrians already within a crosswalk that problems arise.

It’s never too late to take necessary precaution when safety is in doubt. Although Spearfish is not a heavily populated areaa��where pedestrians are hit by vehicles every single day. No records indicate that any pedestrian has been struck in the crosswalk on Mason Street. However there is minimal protection against a future incident. There is little warning of a crosswalk up ahead when taking the curve from University to Mason so drivers will at times unintentionally pass through the crosswalk without yielding.

The weathered and faded paint stripes aren’t enough. Placing a law enforcement officer to police the crosswalk is impractical and inconvenient. Aside from repainting the stripes a bright, reflective white and adding more signs to give better warning to those flying around the corner, some common sense advice to drivers is to just slow down. Heavy foot traffic is to be expected near a college campus as spring is heavily anticipated. Drivers should be more respectful of those who choose to walk to class. Whether you’re walking or driving, remember to look both ways before crossing the street. Twice.